There used to be a stigma associated with raising pigs — they can be dirty and loud. They are often as curious and rambunctious as toddlers. But Hidden Stream Farm is built on pork, and raising pigs has allowed the family to grow — farmers Eric and Lisa Klein have five kids. This Elgin, Minn. business has grown too, expanding into beef and chicken, all while remaining antibiotic-free.

The Kleins married in 1997 and moved back to Lisa’s childhood farm. She says that they wondered how they were going to make the farm pay: “Pigs were at the bottom of the market, and it’s a small farm. We decided we were going to direct market so we can set our own price. We did our first farmers market in 1999, the same year my son was born. That was 15 years ago.”

Top: Eric Klein walks with some of his cattle to move them to a new pasture.

When Lisa was a child, Hidden Stream Farm was a dairy farm with a few pigs. “Nobody likes [raising] pigs, but they are money makers, ” she says. Hidden Stream is now home to around 500 pigs and 70 cattle (more of the Kleins’ cattle are kept on a neighboring farm).

Eric opens a gate to allow the cattle through.

The cattle are moved to a new grazing area every few days. The Kleins credit the healthfulness of pasture grazing with their ability to avoid using antibiotics on their cattle.

Two or three cattle are butchered every week. “Ninety-nine percent of what we do is direct marketed: All our pigs. All our cattle,” says Lisa.

The cattle graze outside throughout the year.

Eric grew up on a hobby farm, but worked on a ranch in South Dakota after college and gained experience with cattle.

Hidden Stream raises a mix of cattle, including some longhorns.

Eric supervises his younger daughter in the pig building.

There is a mix of pig breeds, including red durocs, in the buildings. The pigs used to furrow in the neighboring fields of corn, but as their numbers grew, “it was a circus getting them back in,” says Lisa. In addition, piglets would drown in the rain. So the Kleins moved the pigs into buildings with dirt floors, where the pigs can still dig around.

“Our business expanded because chefs move around and want to keep using our product,” says Lisa. 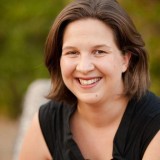