There’s a big, white vinyl sign on Nicollet Ave. and East 42nd St. in Minneapolis announcing $1.99 breakfast and $1 slices of pie at Curran’s Family Restaurant. We’d passed it too many times to count before finally taking the bait. Still, we were wary: If the cheap breakfast and pie were any good, surely we’d have heard it through the food-obsessed grapevine. Frankly, we expected large portions of greasy breakfast that would lead us right back to bed and small store-bought slices of pie that would give us a sugar rush and not much else. Thankfully, our snooty expectations were off — way off.

The breakfast special is available 6-8:30am and includes two eggs, hash browns or sliced potatoes, and two pancakes or toast. There aren’t any bells and whistles; this is straight up family-style breakfast. It’s hearty and, for the most part, damn good eating. We tried the eggs three different ways: over easy, over medium, and scrambled. Each preparation was spot on, and the eggs weren’t greasy or over salted, a departure from usual “greasy spoon” fare.

The hash browns were equally delicious and, to our great pleasure, crispy (with overcooked eggs, soggy hash brows are contenders for the title of biggest breakfast pet peeve). The pancakes were just like Mom made them: golden brown and not too thin or too fat. And while we might prefer real maple syrup, that would be a hell of a lot to ask of a $1.99 breakfast. The toast was… well, toast. The only item we disliked was the sliced potatoes. Served with sauteed onions, they had decent flavor, but were floppy and lacked a good sear.

So the early bird special impressed, but we remained skeptical about the $1 slices of pie, available every day from 2-5pm and 7pm-close. Peering into the case, the pies looked tasty, but as we pie lovers know all too well, looks can be deceiving.

We’re happy to report that the four pies we tasted were as good (or nearly as good) as they looked. The surprisingly large pieces were a great value, too. A sunny blend of sweet and tart, the fresh strawberry pie topped with canned whipped cream was delicious. The whole berries were ripe and the house-made crust just the right amount of salty and buttery, almost like a shortbread.

Although fresh strawberry is the house pie, banana cream was our favorite. We loved the flaky crust, ripe banana slices, and homemade whipped cream. Although flavorful, the pudding layer was set a bit too hard, resembling flan. Still, we will return soon for this dessert. The other two pies we sampled — pumpkin and pecan — weren’t gourmet greatness (cinnamon and nutmeg overpowered the pumpkin flavor, and the pecan was a touch overcooked) but would hold up at any family Thanksgiving.

Over breakfast, a friend aptly summarized our feelings about Curran’s specials: “This food is not just good for the price, it’s just good.” The staff is warm and understandably proud of their comfortable neighborhood institution, the kind of place that makes you want to become a regular. 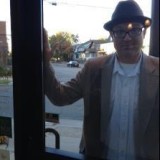 “House-made crust”? The pies are Chef Pierre brand (as in Sara Lee), it says so right on the sign. Why not just review the frozen foods section at Cub?

Not true. Several of the pies are homemade, including the banana cream and fresh strawberry. They do bring in and bake the pumpkin and pecan (the two we liked least). But thanks for the smart-ass comment anyhow.

Really? That strawberry pie crust looks suspiciously like the one on the Chef Pierre site (and identical to the pumpkin pie crust). http://www.saraleefoodservice.com/Products/Bakery/ProductDetail.aspx?ProductID=656 I’ll concede perhaps they make their own fillings, but no way that crust isn’t machine-stamped in a large factory.

Thanks a million for writing an article about our specials. We love that soooooo many people are taking advantage of these amazing deals. We encourage every one to try our pie, and see for yourself why we are so much better than what you would find in the frozen section at your local grocer. Worst case scenario, you will be out $1.