Perhaps it’s the lack of competition in the tiki bar space… or maybe it’s the admittedly beautiful patio. For some reason, Psycho Suzi’s’ popularity seems to be inversely related to the quality of their drinks.

Working in North Minneapolis, happy hour with coworkers tends to gravitate toward the same few local bars — typically places with cheap beer, a minimal commute, and — for extra points — a sunny patio. Meeting all these criteria, Psycho Suzi’s tends to be a top choice — yet it took me months to come to terms with the fact that I have not yet found a “drinkable” (by which I mean sufficiently strong, clean-tasting, and only moderately sweetened) cocktail at a place billed as a tiki bar.

Upon examination of Suzi’s drink menu, billed on their website as “Delightful, Delectable, Deplorable,” it’s clear to see where this one falls (hint: it’s not the first two). Each item’s description is more vague than the last, filled with evocative prose about headhunters and different colored tiki mugs — if you’re lucky, the description of your drink of choice mentions the inclusion of some rum or a cherry (as in the “Virgin Sacrifice,” quoted below).

“Everyday [sic] a disturbing spectacle of tyranny ensues. A gang of Elvis impersonators entices another virgin with fermented blue nectars, then throws her into the volcano… which is not very romantic. Served in a mean green tiki with the cherry intact.”

Given this (albeit amusing) description, what would you expect to be served? A virgin? A volcano? Elvis impersonators? As it turns out, the blue nectars are, in fact, relevant — as is the cherry — but a potentially blue-colored drink with a cherry on top (in a recent visit, the shriveled specimen below) tells little of its contents or flavor.

Typically, the frustration of an underwhelming menu can be mitigated by competent waitstaff. In the case of Psycho Suzi’s, each inquiry into the contents of a drink was met with a confused, “I don’t know, the stuff right there (pointing at the incredibly vague drink description).” Further questioning revealed that the waitresses we asked knew nothing of the drinks beyond a base-level assessment of sweet versus boozy – which, it seems, is more of a systemic problem than the fault of any waitress in particular, as one waitress confessed that she wasn’t allowed to watch the bartenders pour the drinks. While she did the due diligence to ensure that one member of our party could order a cocktail sans sour mix, the inconvenience of checking with three different sources could have easily been avoided with a more accurate menu.

The fact that only one drink (the aforementioned “Virgin Sacrifice”) was suggested to us to be sour-mix-free is already troubling. Beyond that, though, all of the drinks we’ve sampled (even those touting “bitter lime”) were far too sweet for those accustomed to anything short of a piña colada. The Virgin Sacrifice was sweet in a flat, synthetic, vaguely coconut-scented way, as was the Eruption in Paradise — which, despite the vaguely “tropical” taste was improved by the visual “wow” factor of its large volcano-shaped vessel (vaguely reminiscent of the antique ceramic Christmas tree my grandmother used to set out each December) emitting dry ice-induced “smoke,” bright-colored straws, and a few neon plastic monkeys clinging for their lives to the top of the peak.

The Miserable Bastard (dark rum and bitter lime? sounds promising…) proved to taste solely of dark rum, perhaps with a hint of cherry. The Crummy Scoundrel, another “strong” drink, tasted more of artificially sweetened fruit punch with a hint of liquor than the “blackberry, pomegranate, and banana” with which it was advertised. Each was adorned with a plastic swizzle stick curiously embossed with the words “Ma’s Fish House” (oddly enough, an establishment in Hawaii).

Despite the frustration with the drinks, Psycho Suzi’s can still be enjoyable if you go in with the right expectations. The patio offers a great view of the river and a good blend of sun and shade, and the varying theme rooms indoors offer a “painstakingly tacky” tiki-style atmosphere for a casual evening out. Suzi’s pizza is serviceable, with a pillowy white crust and sweet red sauce, and the beer list features a number of solid choices (Fulton, Surly, 21st Amendment, among others). Your best bet? Head to Suzi’s for a beer on the patio ($3 taps during happy hour) to enjoy the sun and the view of the water, then make the trip home and mix yourself a martini.

BEST BET: Stick to the beer list — if you’re craving a cocktail, make one at home later. 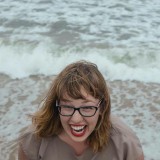 I used to live about two houses down from the A&W that used to be there. Wish they’d kept the A&W, to be honest. Neither the drinks nor the food impressed me. :\

Just don’t ask for ice in your non-tiki drinks. My husband got charged TWO DOLLARS to have ice put in his old fashioned. Srsly. Ridiculous.

Spot on! Couldn’t have written it better myself. If it wasn’t on my bicycle commute, I probably wouldn’t bother to go there.

Have to agree with this assessment. Have never quite fancied their cocktails. I do stick to the beer list because there are beers that I enjoy drinking. Seems that whenever we get a pizza (which is quite good), they serve us the wrong one, and then make another for us. I think it’s awesome, and is the reason I’m going there for lunch today.

I was just there last weekend with my girlfriends for a bachelorette party… our server brought us our water AFTER we were all done with our dinner and drinks. And then we went downstairs to the patio area and they would not give us water unless we already had glasses. What??? Unbelievable. I hope they can figure that one out because that is just ridiculous.

Don’t go to Psycho Suzi’s expecting craft anything (aside from beer.) Go there expecting kitsch and fun and sugar and grease. Others are free to disagree, but I find the element of mystery surrounding the tiki drink ingredients to be part of PS’s quirky charm. The fact that it’s probably the only place in town where I’m okay with that lack of transparency tells me that Psycho Suzi’s does its schtick extremely well.

There are many places in our city to get craft this and artisan that, but there is no other place I’m aware of that executes a creative concept quite as well Psycho Suzi’s. I’m glad we have it.

Not only were the tiki drinks puckeringly sweet and nearly undrinkable, but the last time I went there they did not even deliver on the promised refund for the tiki cup deposit (something like $5 a drink). I ended up with a $28 tab, including tip, for two drinks my girlfriend and I absolutely hated.

Nailed it. But at this point, the place is filled with middle-aged suburbanites…glad to have their taxes in our neighborhood.

$3 Guinness during happy hour though…so that is great…in the winter…when it’t empty.

Agreed 100%, but i’m bummed you didn’t mention how strangely suburban and out of place the whole thing feels. It’s like a tiki version of the Rain Forest Cafe complete with waterfall.

At least the old room had some charm.

I have been unfailingly disappointed with this place. I’m a little surprised people haven’t ripped on the food more. It takes so little effort to make decent, simple appetizers. But I’ve hated everything I’ve ever eaten or imbibed there.

I couldn’t agree more with this assessment. The patio is fantastic, but the service and tiki drinks border on horrific. Do they hire their staff based on their ability to mistreat customers?

Thank you for not falling to sway of this community “darling.” Finally an accurate assessment!

Jeez when did Psycho go completely downhill? My old friend who moved had patroned the old Psycho religiously, he’ll be greatly disappointed. No wonder I never hear of my friends going to Psycho anymore.