On an overcast day in June, the Concrete Beet Farmers are hard at work. Scattered across a plot of land the size of a typical city lot, the farmers adjust tomato trellises, prepare soil for planting, and break up pieces of concrete to make a little patio at a vegetable washing station. The farm seems to pop out of nowhere on a South Minneapolis city block. Yet the plentiful plants, the neat signs labeling each crop, the tool shed, and even the stray cat wandering around seem right at home.

This group of six urban farmers, all in their 20s and two still in college, came together for the first time this year, both through college friendships and accidental connections. (Pictured, above from left to right: Eric Larsen, Emily Engel, and Emily Hanson). The Concrete Beet Farmers now farm about three quarters of an acre on three city plots in the Phillips neighborhood in Minneapolis. They practice sustainable, chemical-free farming, but are not certified organic, nor are they working towards certification (it is very difficult for a city lot to become certified). They have 17 CSA (community supported agriculture) members and supply vegetables to Common Roots, the St. Paul Cheese Shop, and the Midtown Bike Café (on the Midtown Greenway). They also set up shop at the Uptown Market every Sunday.

The farmers are all at once young, knowledgeable, articulate, and a little awed by what they have accomplished. They radiate a mixture of youthful enthusiasm, confidence, and shock. Most of all, they are simply excited about their success this first season – they started small and managed to accomplish their goals.

The farmers are bursting with ideas about how we should be growing and consuming our food. Alex Liebman, another of the six farmers, talks easily about the politics behind the local food movement.

“I was totally turned on by what you can do through farming about all these big world problems – global warming and malnutrition, for example – that are so closely linked to growing food.”

You would have to be pretty idealistic to have accomplished in a very short time what this young group has. And maybe a little lucky, too. Their luck came in the form of land: They heard about the availability of the land for all three of their plots through somewhat random connections and use some of it at no cost. They have also benefited from the help and advice of other urban farmers and from a grant.

But not everyone would know what to do with such luck and then how to put their noses to the grindstone. To get started, they purchased three truckloads of compost to add to the already-good soil, worked with neighbors to find a water source, and organized volunteer days to get some extra help.

Now they are growing crops bountifully; when The Heavy Table visited, Liebman showed us around the farm, pointing out kale, arugula, tomatoes as we walked. The plants themselves are beautiful – healthy, substantial, and simply good-looking. A few times he absently picked off a leafy green to snack on. Clearly this is the norm. He offered us a sample of peas from one part of the row, then from farther down the row, explaining they were better at that end.

The farmers have built a “living” fence of sorts that borders the alley. Basil or kale grows on the top of circular piles of hay, and potatoes grow in the hay. Hops and crawling spinach line the chicken wire fence that surrounds the crops – they hope to cover this fence with other edible plants. Being short on space, they have adapted techniques you would not see outside the city. Arugula and bok choy grow closely in the same row, for example. No space is wasted or left unused.

Dusty Hinz, the only farmer in the group who has no previous experience farming, tells me that “there’s always work to be done. Always,” but that he doesn’t think of the work as “work.” He speaks of the friendships the farmers have created. Liebman and Larsen are working nearby as Hinz speaks and chimes in with a few sarcastic comments, but in the way that only good friends are sarcastic together. Hanson later echoes Hinz’s sentiments: “One of my favorite things about farming is getting sweaty and dirty together. How can we not become good friends?”

The whole crew dreams of expansion: more lots in the city, perhaps growing grains and root crops outside the city, connecting more with the neighbors, but they also seem aware of the fact that they must grow slowly and thoughtfully. “We want to create an infrastructure so we’re still here many years later,” says Hanson.

One goal is especially important to the Concrete Beet Farmers: They want to play a bigger role in the neighborhood community. They say that they have mostly been well received, but are looking forward to a time when they can do more educating about where food comes from and possibly employ neighborhood teenagers to work on the farm.

The farmers hail from Minnesota, New Hampshire, Vermont, and Massachusetts (two grew up on farms, one has no farming experience, and the rest have done some farming in recent years) and are committed to the organic scene in Minnesota. They do not expect to profit financially this first year, but hope to eventually live off the profits from the farm. Part of their vision of sustainability includes financial security for the farmers. For now, they supplement their small profits with second jobs.

It seems as if, even at the farm’s young age, that the Concrete Beet Farmers will be able to accomplish these goals and be here for the long haul. Most importantly, they are fortunate enough to have not had, as Larsen points out, “any major disasters.”

In fact, the opposite seems to be true. “I think we have been really lucky. I’m happy,” says Liebman. Hinz says he had “no idea it would go down the way it has.” Liebman responds, “I had a plan, man; speak for yourself.”

Hinz is adamant: “I cannot believe what has happened,” he says. “It is crazy and kind of radical.” 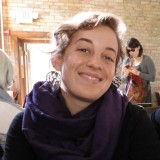 Hannah Rogal grew up in Iowa in a house where freshly baked bread was the norm, and summer vegetables were just steps away in the backyard garden. After a stint in Massachusetts for college, she found herself in Minneapolis where she spent a couple years in fundraising before jumping fully into the food world. Now she spends her days nurturing her sourdough starter, training for half marathons, and perfecting her homemade ice cream. In the early morning hours, she works as a pastry cook.

2 replies on “The Concrete Beet Farmers in Minneapolis”

I would love to know where I could buy just the “Greens” from the beet. If there is a lead where I can obtain the Greens that would be very much appreciated. Thank you